A one-off screening of a movie that a member of our staff loves. It doesn't have to fit in to our programming model in any way, it just has to be a title close to their heart. Maybe it's a cherished childhood film. Or maybe it's an experimental piece that will CHANGE YOUR LIFE (I can't believe you haven't seen this one!). Or maybe it's the best thing they've seen recently that we weren't able to otherwise get on our calendar.

All films in the Staff Pick Series are FREE TO ATTEND. We do always recommend that patrons reserve tickets in advance to guarantee a seat at the show. 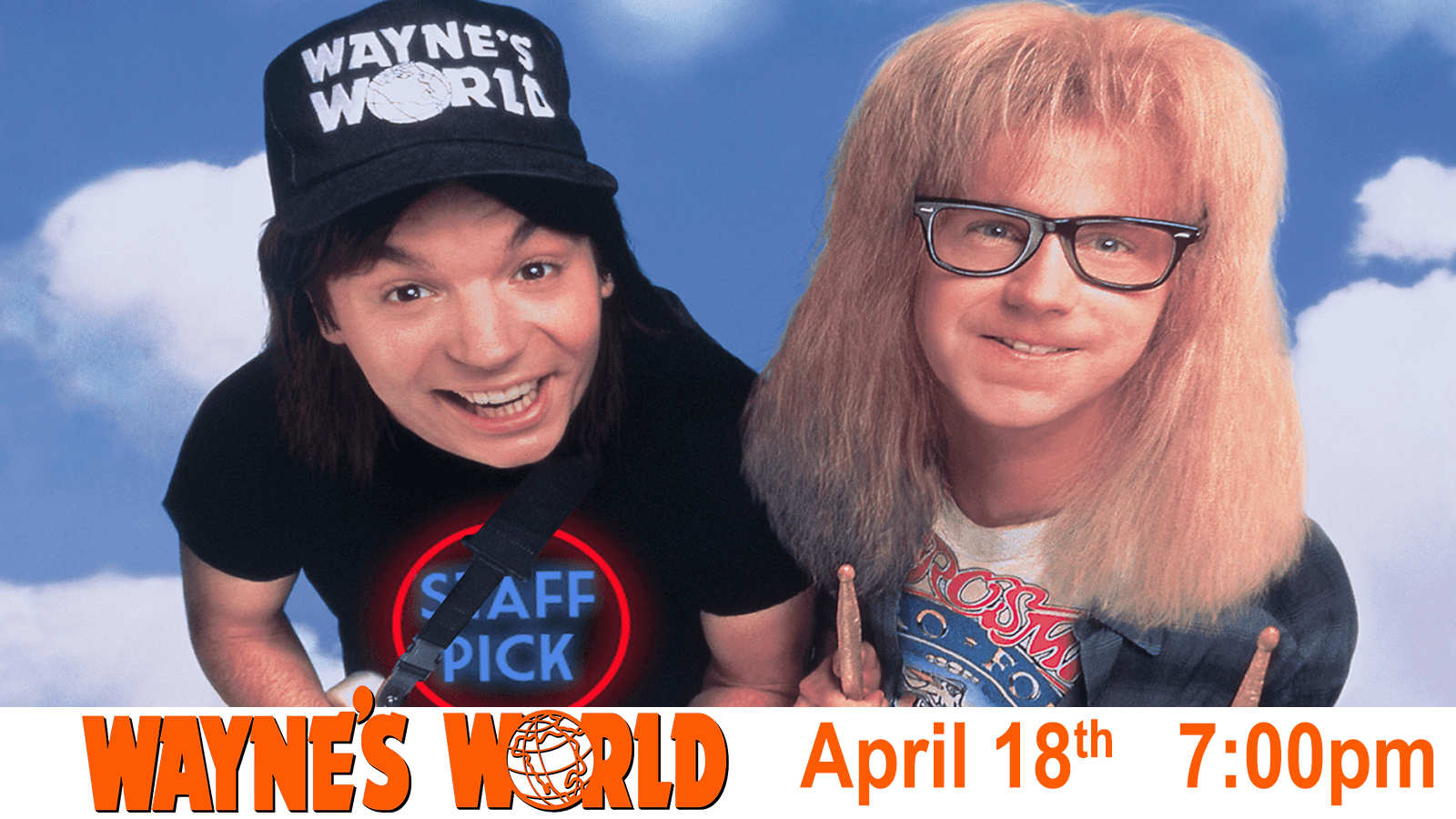 A Staff Pick from Craig. Originally a skit on "Saturday Night Live" during the late '80s and early '90s, "Wayne's World" is about two dudes who host a public access TV show, which is mainly about rock, babes and people who live in the area. When the network comes calling, will they sell out? PG-13 / 95 min. Free t 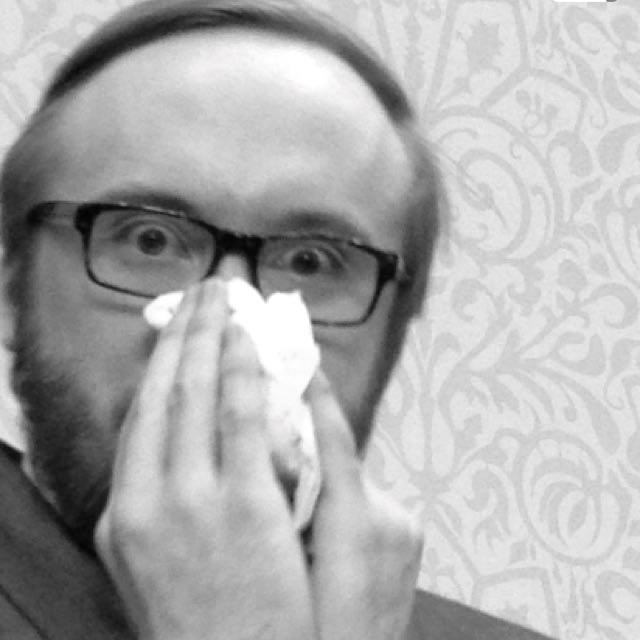 Here's what Craig had to say about why he wanted to share this film with Normal Theater audiences: "WAYNE'S WORLD is one of the first movies I remember putting into my old VCR. Meyers and Carvey never fail to put a smile on my face when I watch their hilarious escapades. So lets buckle up and as always...party on" 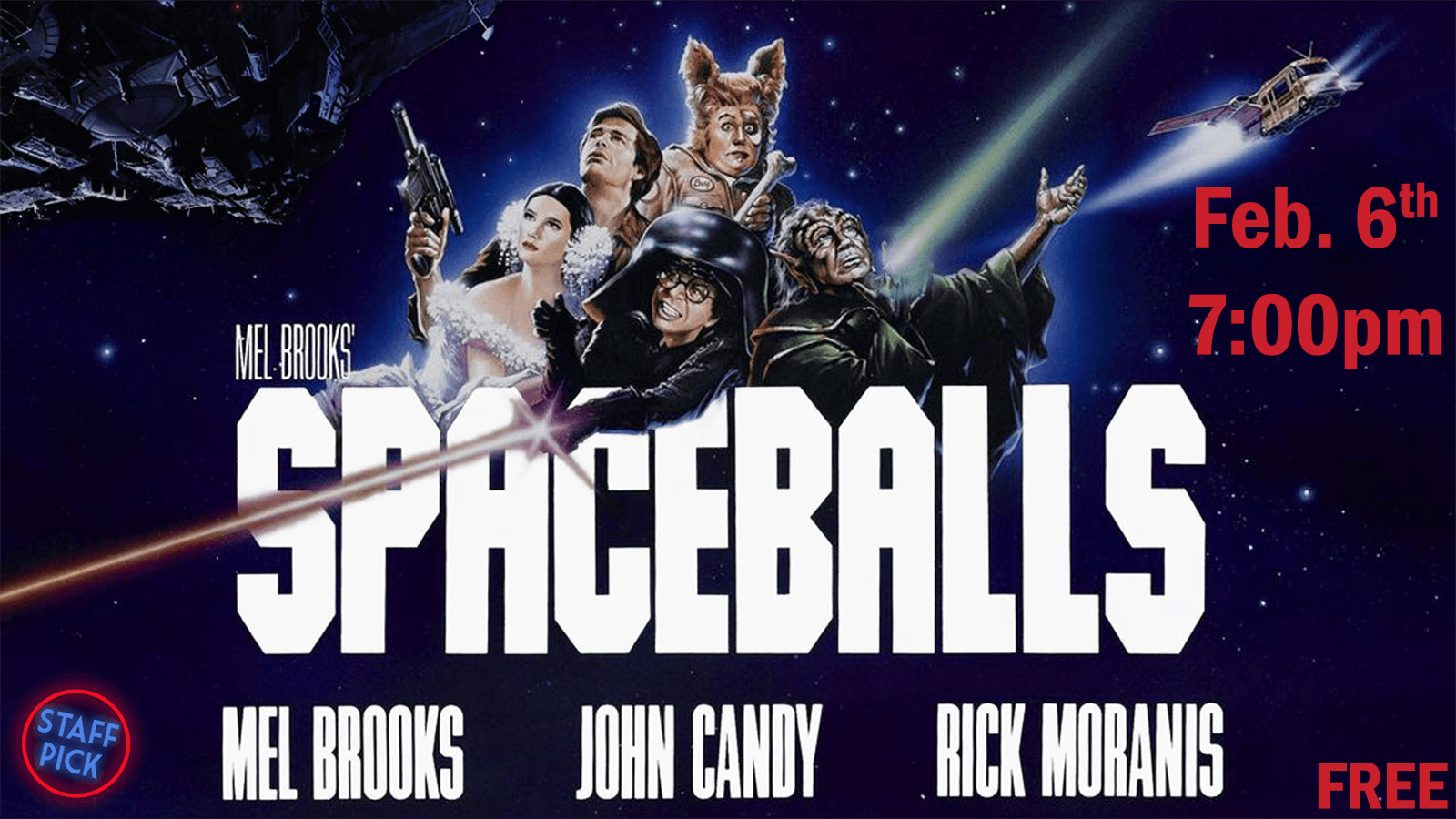 A rogue star pilot and his trusty sidekick must come to the rescue of a Princess and save the galaxy from a ruthless race of beings known as Spaceballs.  PG / 96 min. Free to Attend.

RESERVE YOUR SEATS TO THE SHOW!

SPACEBALLS was my favorite movie growing up. Now maybe this Mel Brooks 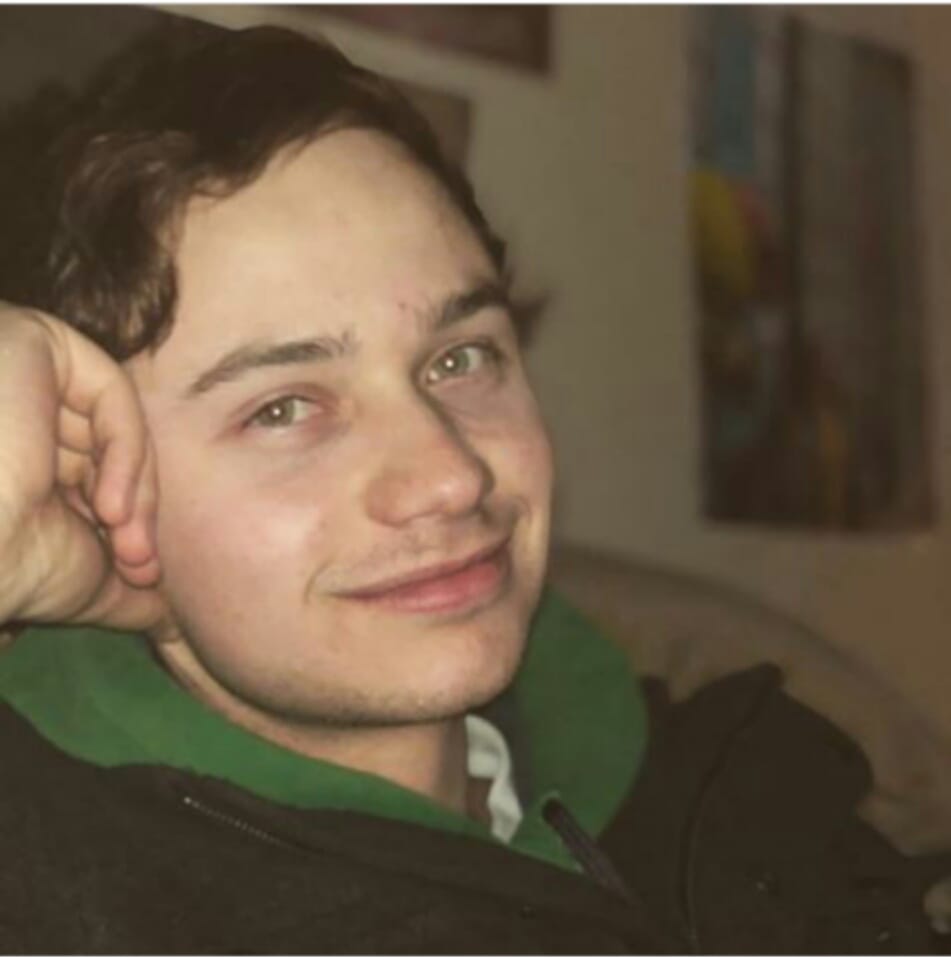 satire shouldn't have been a nine-year-old kid's favorite movie, but it was without a doubt (and without my parents discretion) the funniest movie I had ever seen. I could watch it a thousand times on my little portable DVD player and never get tired of the goofy characters, the cheesy jokes, and all the references poking fun at other popular sci-fi movies. Though it's not my favorite Mel Brooks movie (YOUNG FRANKENSTEIN takes that cup), SPACEBALLS holds a very dear spot in my heart and helped mold the sense of humor I have today. And with a cast including John Candy, Rick Moranis, and Joan Rivers, how couldn't it? I hope you will join me in finally being able to see this "ludicrous" film on the big screen! 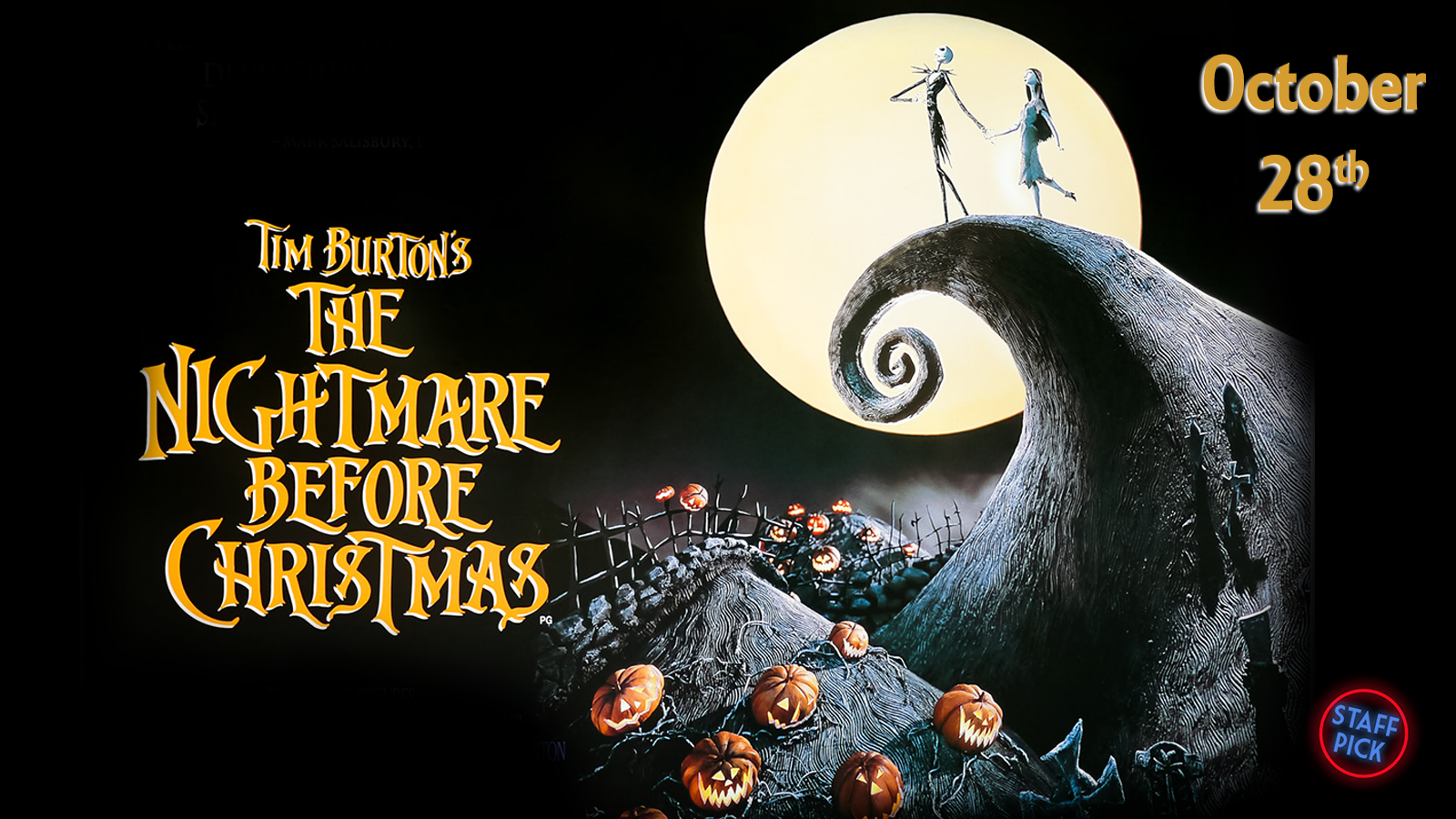 The Nightmare Before Christmas

Is it a Christmas movie, or a Halloween movie? Doesn't matter- it's an unbelievable offering from Tim Burton, and as our October Staff pick, it's free to attend.

The film follows the misadventures of Jack Skellington, Halloweentown's beloved pumpkin king, who has become bored with the same annual routine of frightening people in the "real world." When Jack accidentally stumbles on Christmastown, all bright colors and warm spirits, he gets a new lease on life -- he plots to bring Christmas under his control by kidnapping Santa Claus and taking over the role. But Jack soon discovers even the best-laid plans of mice and skeleton men can go seriously awry. PG / 76 min.

RESERVE YOUR SEATS TO THIS SHOW!

"The Night Before Christmas and I have a torrid relationship. I was only 6 when I was savagely held hostage by my older cousins. They attempted to convince me of the movie's watchability by assuring me that nothing in the film was real, or even scary at all. This was a traitorous lie. I had nightmares for week 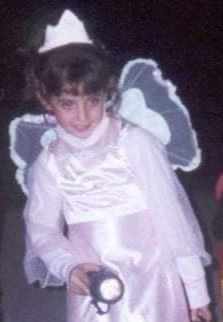 s after and hated the film for years! The Oogie Boogie held my Kindergarten dreams tightly in his creepy sack hands. When I was 13 however, I came across the film playing on TV sometime that October. I decided that it had been years since I had seen it;so I gave it a chance. When I rewatched the film, my whole view flipped. I was enchanted by Tim Burton's style and the story. His characters and the art drew my attention in and kept it there. I realized I had been silly to cling to the fear for so long, even when I had forgotten why I was afraid. Ever since, I make a point to watch it every year around Halloween. So come and relive my childhood nightmares with me!" 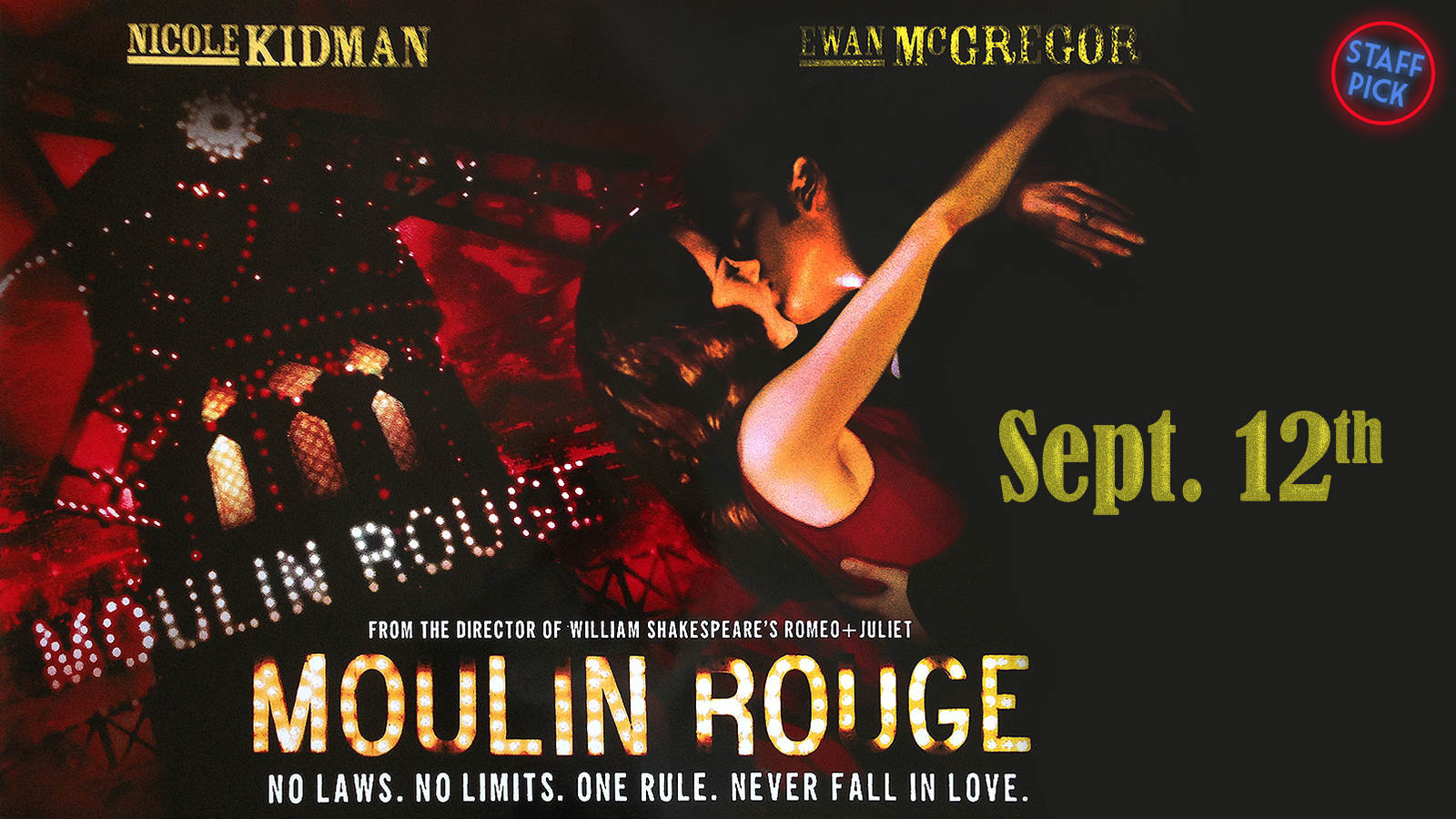 A young Englishman in the Paris of 1899, becomes infatuated with Satine, a singer at the Moulin Rouge. However, she has been promised by the manager to a Duke in return for funding his next production. As the young lovers meet in secret, Satine's wedding day draws closer but she hides a fatal secret from both Christian and the Duke. PG-13 / 130 min.

This staff picked film is FREE to attend. We highly recommend reserving your seats by following the ticket link!

RESERVE YOUR SEATS TO THIS SHOW!

Moulin Rouge came out when I was four years old, so I was probably to 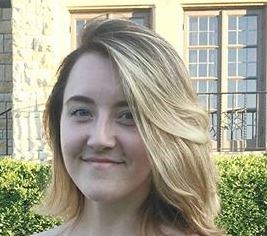 o young to see it when I actually did. I absolutely fell in love with the spectacle as well as the music in the movie. I would watch it all the time and try to recreate the scenes in my living room for my family (I still do this, and I play BOTH Satine and Christian). This movie first inspired me to perform, then to explore other aspects of theater/film/television work that I hope to be a part of once I graduate. I want everyone to experience this over-the-top and outstandingly beautiful work by Baz Luhrmann, because “the greatest thing you’ll ever learn is just to love and be loved in return.” 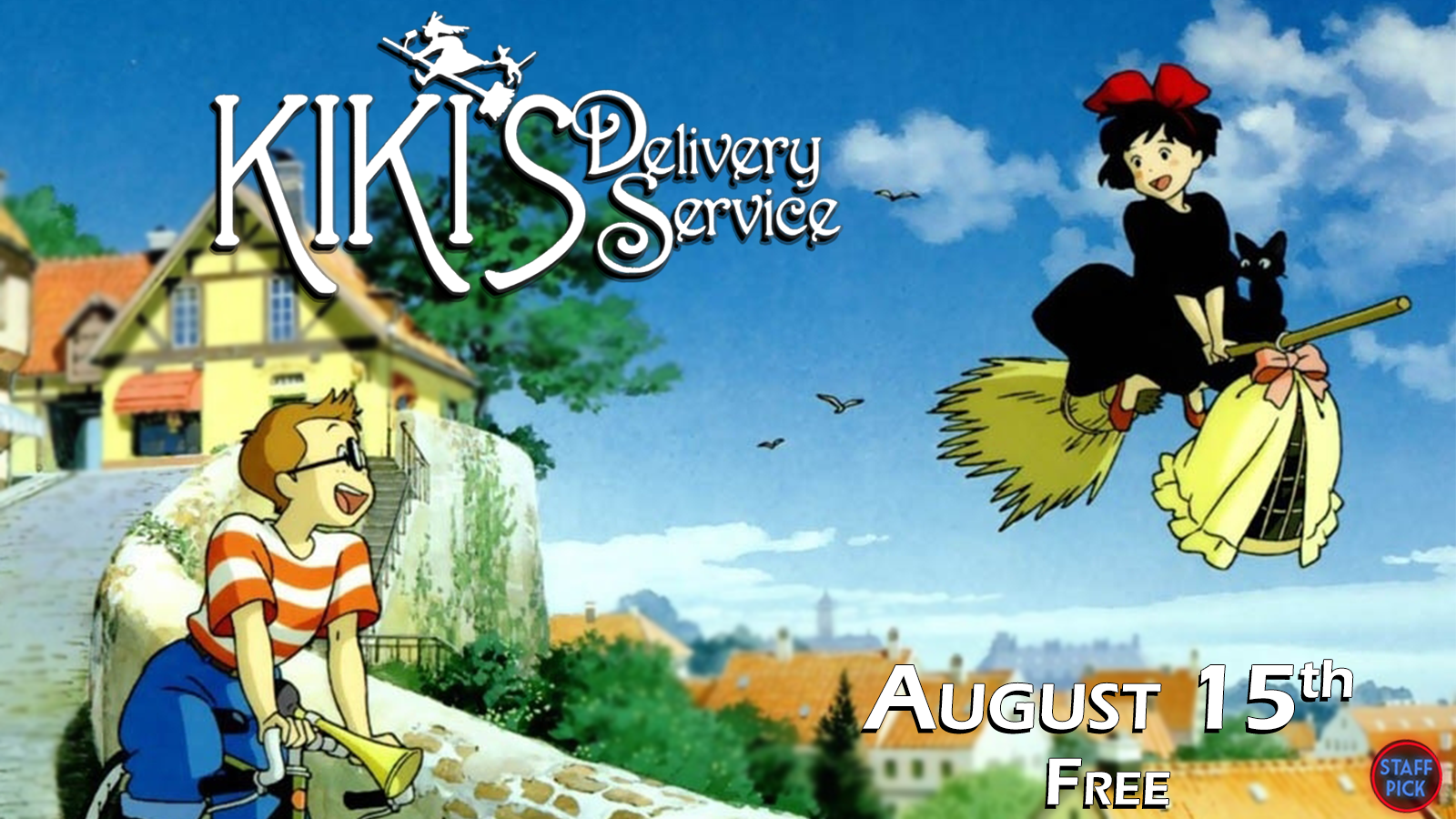 A young witch, on her mandatory year of independent life, finds fitting into a new community difficult while she supports herself by running an air courier service. Directed by the legendary Hayao Miyazaki. G / 103 min. This is the English language dub, featuring an amazing cast.

This film is FREE TO ATTEND. We highly recommend reserving your tickets in advance.

RESERVE TICKETS TO THIS SHOW!

"Throughout my years at the theater, I have had so many wonderful experiences seeing so many amazing films—working here changed the way I watched movies, and it allowed me the chance to see the ones I would never have chosen otherwise. I became more open to directors and genres that I previously had no exposure. But the Normal Theater building itself didn’t do this. The people here did. There is something magical about the Normal Theater—and it’s no secret to me. The magic comes from the people who work here and who fight to provide amazing films and share that infectious amazement and appreciation with every one else." 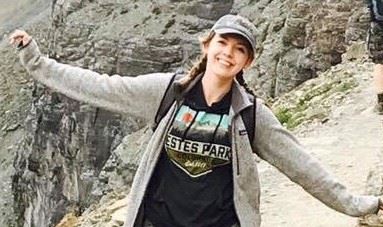 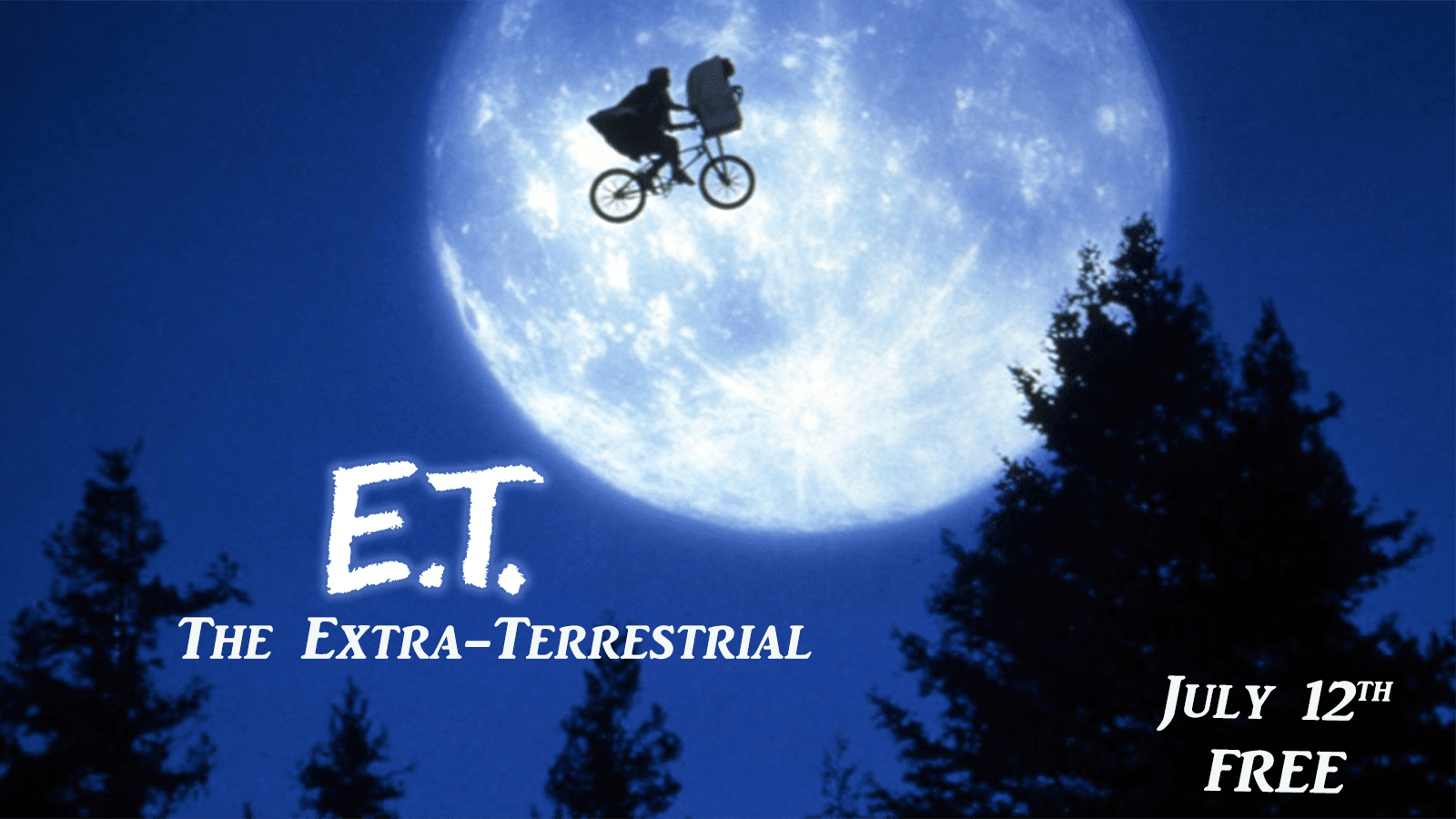 After a gentle alien becomes stranded on Earth, the being is discovered and befriended by a young boy named Elliott (Henry Thomas). Bringing the extraterrestrial into his suburban California house, Elliott introduces E.T., as the alien is dubbed, to his brother and his little sister, Gertie (Drew Barrymore), and the children decide to keep its existence a secret. Soon, however, E.T. falls ill, resulting in government intervention and a dire situation for both Elliott and the alien. PG / 121 min.

"I have actually never seen it. The reason being that when I was growing up, my parents were dirt poor, so we literally never went to the movies. O 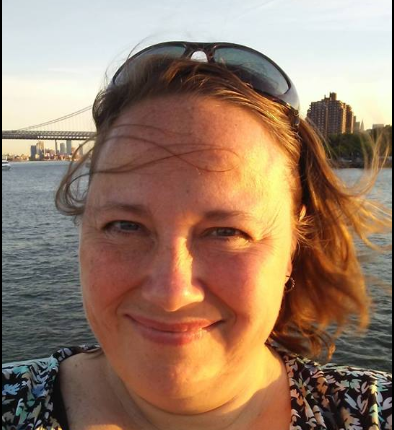 ver the years, it has become a joke with family and friends that I have never actually seen ET, which was the biggest blockbuster back in the day...Before having kids, my coworkers were incredulous that I had never seen it! And then, after getting married and having a family, I have just gotten busy and forgot all about that film. So showing it at the [Normal Theater] would be the opportunity to finally see something everyone else in the world has seen."

In honor of Jenn, we will be presenting this film for FREE for one night only. Make sure you register online so you don't miss your chance to see this wonderful film on the big screen! 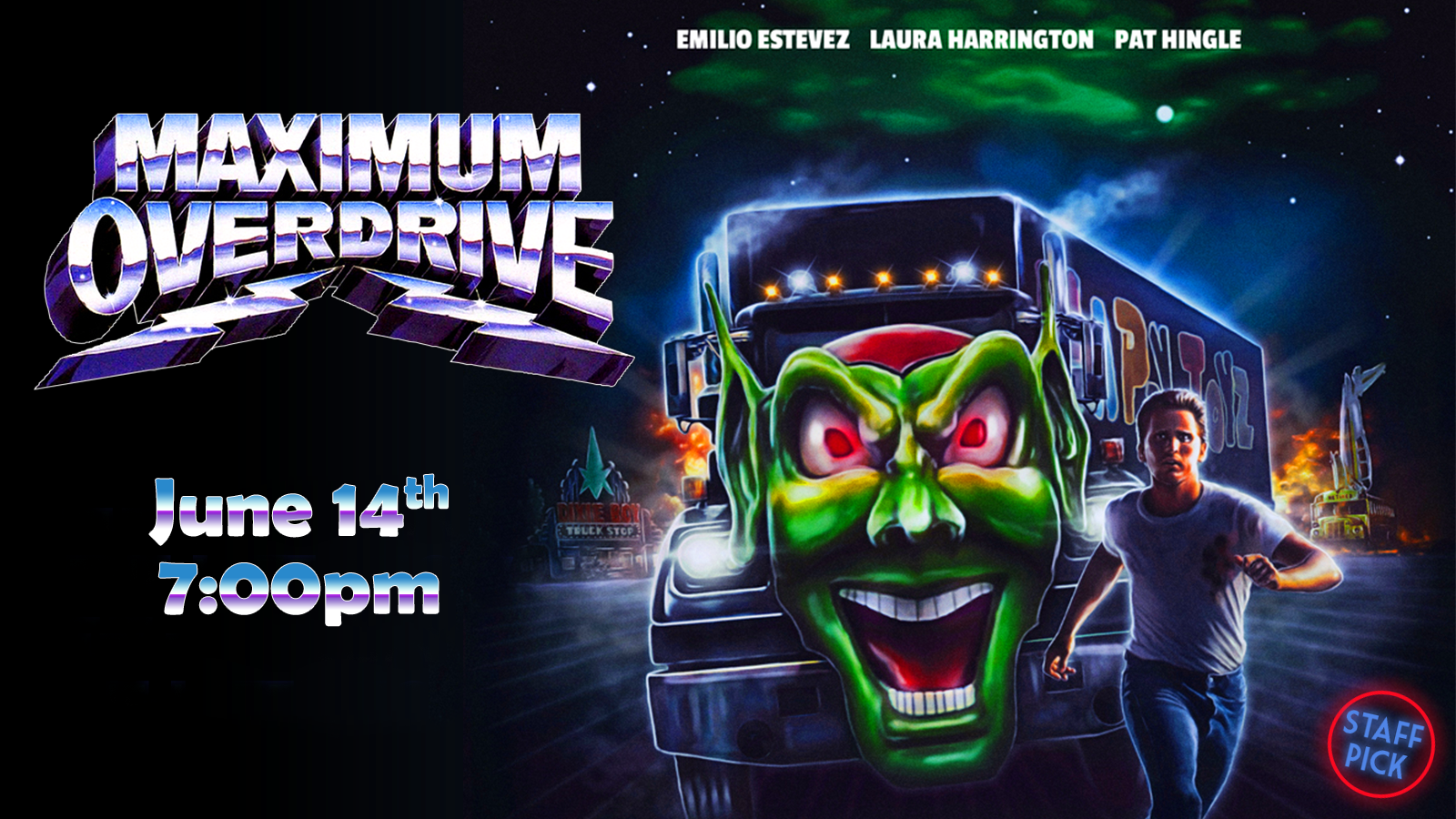 After a comet causes a radiation storm on Earth, machines come to life and turn against their makers. Holed up in a North Carolina truck stop, a group of survivors must fend for themselves against a mass of homicidal trucks. A diner cook, Bill Robinson (Emilio Estevez), emerges as the unlikely leader of the pack, attempting to find an escape plan for himself and the survivors, who include his boss and a newlywed couple. R / 98 min. 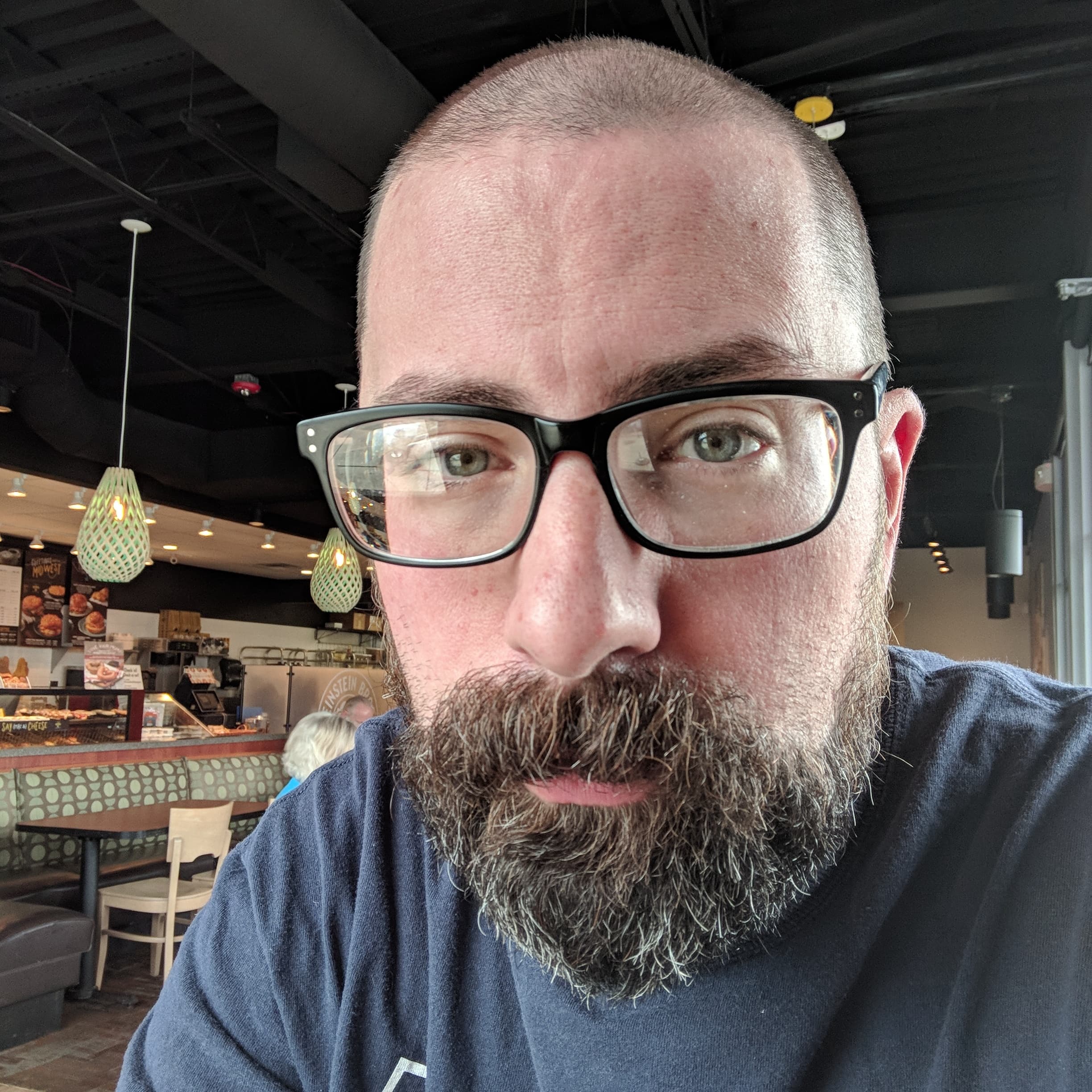 "Where else can you get the woman who voices Lisa Simpson and a less notorious Sheen sibling? Where else but Maximum Overdrive of course! Oh, that and it's based on a Stephen King short story with King in his only directorial outing and it somehow involved the Green Goblin’s face. Run people run! In this world the machines are tired of doing your dirty work and decide enough is enough. Stranded in a gas station Sheen the Lesser(or maybe greater) must stave off the mechanical uprising."