In mid-June 1939, moviegoers to the year-and-a-half old Normal Theater were treated to one of the greatest pairings (dancing or otherwise) in Hollywood history—Fred Astaire and Ginger Rogers. The Story of Vernon and Irene Castle was the last of their nine movies with RKO Radio Pictures. The Depression-era hoofers first paired off in Flying Down to Rio (1933), and their critical and popular hits included The Gay Divorcee (1934), Top Hat (1935), and Swing Time (1936).

Their RKO farewell was a musical biopic based (loosely, of course) on ballroom dancers Vernon and Irene Castle. Spoiler alert! It's the only Astaire-Rogers partnership that doubles as a tearjerker. A decade later, the dynamic dancing duo reunited for one final hurrah - Metro-Goldwyn-Mayer's The Barkleys of Broadway (1949).

The backend of the double feature was the equally charming romantic comedy Midnight with Claudette Colbert and Don Ameche. Talk about another great pair! Too bad they would go on to make but two more movies togethe - the comedy Guest Wife (1945), and the Douglas Sirk-directed thriller Sleep, My Love (1948).

WARTIME AT THE NORMAL

By mid-January 1943 the United States was entering its second full year of war against Nazi Germany and Imperial Japan. Back on the home front the war was never too far away. Normal Theater patrons, for instance, were encouraged to purchase war bonds in the lobby. Moviegoers could also follow the unfolding events in Europe and the Pacific through newsreels shown before the main feature.

Furthermore, many films from this era were about the war, from the 1941 comedy Buck Privates to the 1945 combat drama A Walk in the Sun. The intent of these films, of course, was to boost home front morale. World War II movies could also be fantastical and wholly unrelated to the real world horrors occurring overseas.

Case in point, Invisible Agent, an update of the H.G. Well's; novel The Invisible Man (first brought to life on the silver screen by Claude Rains in 1933). This somewhat forgotten sci-fi thriller stars Jon Hall as the grandson of the original Invisible Man, who uses the invisibility formula to spy on nefarious Nazis and sabotage their maleficent machinations, including an attack on New York City. Two years later, Hall appeared in The Invisible Man's Revenge.

The Normal Theater opened on November 19, 1937, with the musical Double or Nothing starring Bing Crosby. The multi-talented entertainer returned to the Twin Cities on a semi-regular basis (if only on the silver screen!), and in the fall of 1944 Bing was back for Going My Way. This musical comedy-drama featured Crosby playing his most beloved big screen character, Father Chuck O'Malley, a role he would reprise in The Bells of St. Mary's the following year. Going My Way captured seven Academy Awards, including best picture, actor (Crosby), supporting actor (Barry Fitzgerald), and song ("Swinging on a Star") with music by Jimmy Van Heusen and lyrics by Johnny Burke.

The war years were a busy time for Crosby, with his motion picture credits including three "Road" pictures with Bob Hope-Road to Zanzibar (1941), Road to Morocco (1942), and Road to Utopia (1945). Crosby, who died in 1977 at the age of 73, remains popular with local audiences, with both Holiday Inn (1942) and White Christmas (1954) two of the bigger draws during the Normal Theater's annual showcase of holiday classics. 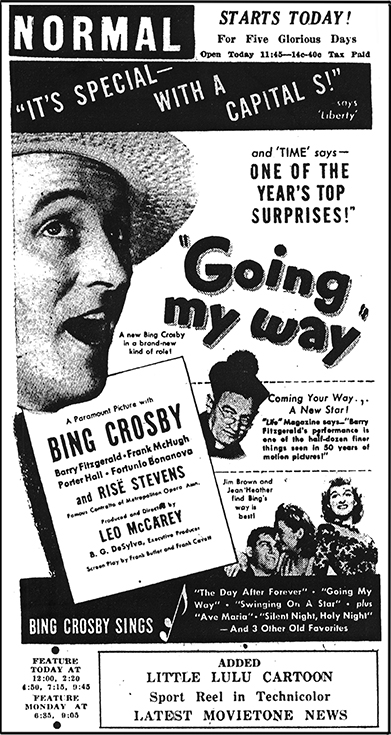 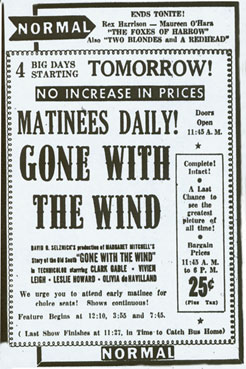 David O. Selznick's Gone with the Wind opened with a December 15, 1939 premiere in Atlanta, Georgia, and soon thereafter went into wide release. It appears as if this beloved Civil War-era epic first arrived in the Twin Cities in early spring 1940, for by that March it was playing to packed houses at the Irvin Theater in downtown Bloomington.

So what's Gone with the Wind doing at the Normal Theater in February 1948, nearly eight years later? Well, Metro-Goldwyn-Mayer (which had acquired the film after Selznick liquidated his movie studio) re-released the film in 1947, and it was this re-release that made it to the Normal Theater in February 1948. Gone with the Wind was also re-released in 1954, 1961, 1967, 1971, and 1974, among other years. Before television (and later videotapes, digital streamlining, and the like) re-releases were the only way for most regular folks to catch their favorite "older" movies.


It was "Action Week" at the Normal in mid-March 1955. The two-gun, two-fisted lineup included the sundrenched noir Bad Day at Black Rock, ably directed by John Sturges; Vice Squad, an Edward G. Robinson "B" picture from 1953; and the acclaimed Howard Hawks' western Red River with The Duke and Montgomery Clift. There was even the anachronistic Bowery Boys feature Bowery to Bagdad featuring the tagline "You'll love them in Bagdad!...as those ding-dong daddies go harem-scarem via the magic carpet!"

As with similar special programming, the Normal Theater combined newer features like Bad Day at Black Rock with second-run (or older) fare, such as Red River, released seven years earlier in 1948. Also of interest is the Saturday serial, the low-budget Man with the Steel Whip. This Republic production made use of recycled footage from previous serials, including the similarly sounding Zorro's Black Whip from way back in 1944! 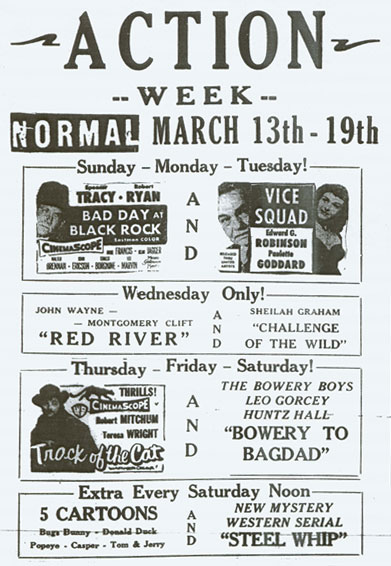 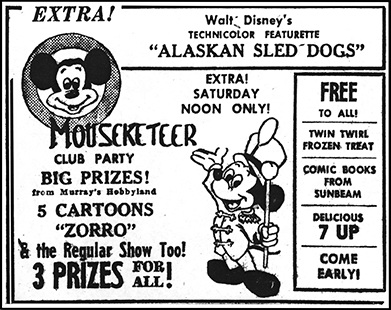 
Who's the leader of the club that's made for you and me? M-I-C- ... K-E-Y ... M-O-U-S-E! In the summer of 1958 the Normal Theater played host to a "Mouseketeer Club Party" as part of its expansive Saturday matinee programming. This was the height of popularity for "The Mickey Mouse Club," which was first televised on ABC from 1955 to 1960. Young theatergoers on this summer Saturday more than a half century ago not only received a frozen treat known as a "Twin Twirl," but also a Sunbeam comic book and "delicious" 7 Up. There were also prizes given away by Murray's Hobbyland, a Bloomington-Normal institution that remains open to this day!

As far as action on the silver screen, there was the Disney live action short "The Alaskan Sled Dog" (the title is misprinted here), a batch of cartoons, a Zorro serial, and the main feature, the comedy No Time for Sergeants staring Andy Griffith and directed by old Hollywood hand Mervyn LeRoy. This was Griffith's second feature film, coming a year after his stunning debut as "Lonesome" Rhodes in Elia Kazan's wickedly dark satire A Face in the Crowd.

A Rom-Com With Rock


The 1964 romantic comedy Man's Favorite Sport was one of the later efforts by famed director Howard Hawks (His Girl Friday, The Big Sleep, Rio Bravo, etc.). The second feature at the Normal that evening was the long-forgotten Rampage, released the year before and starring Robert Mitchum.

Elsewhere in the Twin Cities on July 16, 1964, moviegoers could catch the musical What a Way to Go! with Shirley MacLaine and Paul Newman at the Irvin Theater, and the Elizabeth Taylor-Richard Burton epic Cleopatra (from 1963) at the Castle Theater. In addition to those two Bloomington movie houses, there was the Drive-In Theatre (formerly the Phil-Kron) on the south end of the city, which was showing two trashy foreign horror films, the 1961 Italian import Goliath and the Vampires and the 1959 Finnish production The Day the Earth Froze. 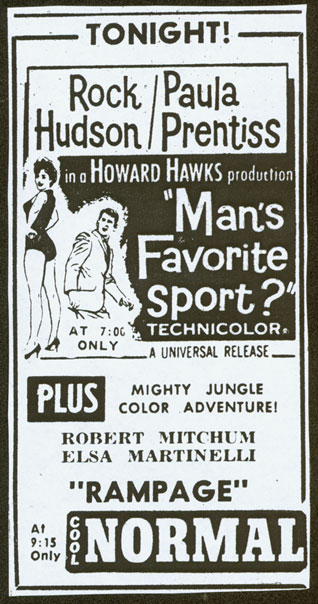 Originally released in the spring of 1968, Stanley Kubrick's science fiction masterpiece 2001: A Space Odyssey was still drawing moviegoers to the Normal Theater in early October 1970.

Next up at the Normal was Trilogy (also known as Truman Capote's Trilogy), first released in 1969. Directed by Frank Perry, Trilogy was an anthology of Capote writings, including his 1956 memoir "A Christmas Memory" and the short stories "Miriam" and "Among the Paths to Eden."


Nobody said the Normal Theater has always been a family friendly venue! In late June 1977, the Normal had the X-rated Soft Shoulders, Sharp Curves, a West German "softcore" production originally released in the U.S. in 1973. Not surprisingly (it was the Seventies, after all) the Normal wasn't the only area movie house showing risqué material. The Del-Van, an adult theater in the Tazewell County community of Delavan located 40 miles west of Bloomington, was showing the X-rated Kinky Ladies of Bourbon Street, Meanwhile, at the Ritz Cinema in Chenoa, a small town 25 miles north of Normal, it was the XXX-rated Easy Alice paired with Massage Parlor Bust.

Elsewhere in the Twin Cities (in addition to the advertisements shown here), Cinema I and II in Normal were screening the more mainstream fare A Bridge Too Far and Exorcist II: The Heretic. 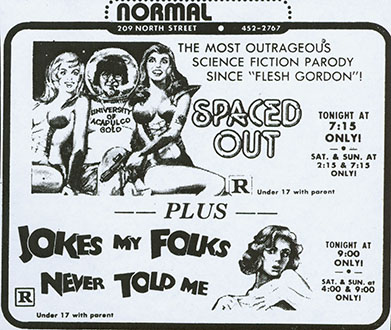 The 1980s, to put it kindly, were most unkind to the Normal Theater. During this decade, the struggling movie house weathered a series of indignities, including the downgrade to "dollar house" status, temporary closure, and then, in the spring of 1985, conversion into a two-screen venue (a process known as "twinning").

Yet as one can see from this November 1980 advertisement, the shabby product on the screen often mirrored the shabby treatment the old Normal received from its chain owner at the time. Spaced Out was a UK sci-fi stoner sex comedy, though truth be told that description proves more interesting than the movie itself! Receiving second billing was the even more forgettable Jokes My Folks Never Told Me, originally released in 1978.

Bill Kemp, McLean County Museum of History librarian, compiled this page. The nationally accredited, award-winning local history museum is located on the historic Museum Square in the heart of downtown Bloomington. Please check them out at www.mchistory.org.